Recently, a Vicar General of an archdiocese, when asked, how many perpetrators are you aware of, answered: “I have to fly.”

Why would anyone answer such a serious question with such a flippant deflection?

Because he knows the United States Conference of Catholic Bishops maintains “The List” of at least 6,721 clerics who have sexually abused minor children in the United States.  To date we know of 3,883.

That leaves a remainder of at least 2,838 clerics on “The List.”

This is a dangerous List.  Who are these priests and where are they today?

Whether it is Los Angeles, New York, or St. Paul, the pattern and practice is the same:

First deny, then delay and finally dribble out “The List” after a civil court orders the release. 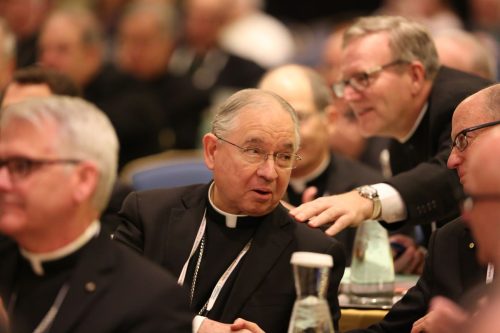 Los Angeles Archbishop Gomez. His List and his secrets are sacred.

Criminal and civil litigation forced not one but three separate “Reports to the People of God” from 2004-2013.  The 2004 report listed some priests and attempted to justify Cardinal Mahony’s geographic solution when Father Michael Baker reported to Mahony in 1986.  The 2005 Addendum listed an additional 26 clerics.

The 2008 Report released on January 31, 2013 (under Los Angeles Archbishop Gomez) dribbled out 24 additional names.  To date the partial list is 269 clerics just in L.A.

New York Cardinal Timothy Dolan – Where is his List?

To date The Public List includes 77 in the Archdiocese, 54 in Brooklyn and 57 in Rockville Centre.

In 2004 Saint Paul released the number of of perpetrators, but the not the names. That number was 33.

In September 2013. Vicar General Kevin McDonough, JCD ,gave an interview where he was asked how many priests he knew of were accused of abuse.  His answer: I have to fly.  This is Father McDonough’s last known interview and worth a listen.

On December 5, 2013, A court order forced Saint Paul to release the 33 names, seven previously unknown that served in over 50% of the Archdiocese parishes.

The stark reality is that the bishops and major superiors of male and female religious orders could produce their Lists with the numbers, names and locations tomorrow.  When asked, however, their actions speak quite loudly, “NO! I have to fly.”

In order to protect the children of today and tomorrow, we cannot allow institutions to maintain secret lists of perpetrators.  We must be relentless to make the secret lists public.